How to Jump Start a Car 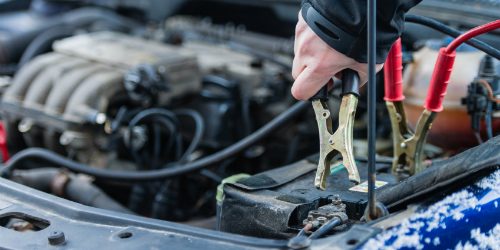 If your car’s battery has died, then it may be possible to get moving again by jump starting your car. To do this, you will need two things; a set of jump leads and a good Samaritan with another vehicle. To safely use jump leads, the battery on the good Samaritans vehicle needs to be the same voltage as your own. Then it’s just a case of following the below steps:

Get out your jump leads

If you don’t own a set of jump leads then not only will you have to find a person who is willing to help you, but you will also have to find a person who does have a set. When it comes to motoring, it’s best to be prepared so if you don’t have any jump leads, now is the time to get some. They can be bought online or from most petrol garages or reputable motor factors, and they probably won’t cost much more than £10.

Prepare the vehicles and jump leads

Place both vehicles as close as possible (without touching of course) and put them in neutral/park with the handbrake on. Turn off the ignition on both cars.

Attach one of the black clips onto the negative battery terminal on the working battery. This may be identifiable by a black piece of plastic, otherwise look out for a – or NEG sign on the battery. The other end of the black negative lead then needs to clip on to an unpainted metal surface on the car with the flat battery. Be sure to pick a part of the engine bay that isn’t too close to the battery. The strut that holds the bonnet open is usually a good choice. The entire set up should look like this: 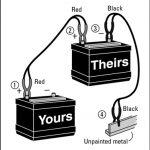 Now that the cars and jump leads are in position you are ready to jump start the car. The first thing to do is start the engine of the car with the working battery. Leave the engine running for a few minutes. After 5 minutes or so, try to start your vehicle. If it doesn’t start, then make sure that both of the jump leads are connected correctly, and leave the working car engine running for a further five minutes. If after this time your car still won’t start, then there is likely to be a significant problem with he battery and it will need to be replaced. This is where your breakdown cover will come in handy.

If your car now starts, you can disconnect the jump leads in reverse order. Be sure not to habitually turn of your car’s ignition, as your battery may not be sufficiently charged to start the car again. Drive around for at least fifteen minutes before attempting to turn off the ignition again. If your car battery is dead again the next time you try to start your car, then it means that your battery is unable to hold a charge and will need to be replaced.

One thought on “How to Jump Start a Car”